This was our fourth cruise with Viking...  and three of those were at Viking's expense!  The way that happened is that I made several very positive YouTube videos about our first cruise with Viking, and it caught the attention of their public relations department...  and ever since then, they've invited us back three different times (at their expense) to sail on different ships and make new videos about the experience. 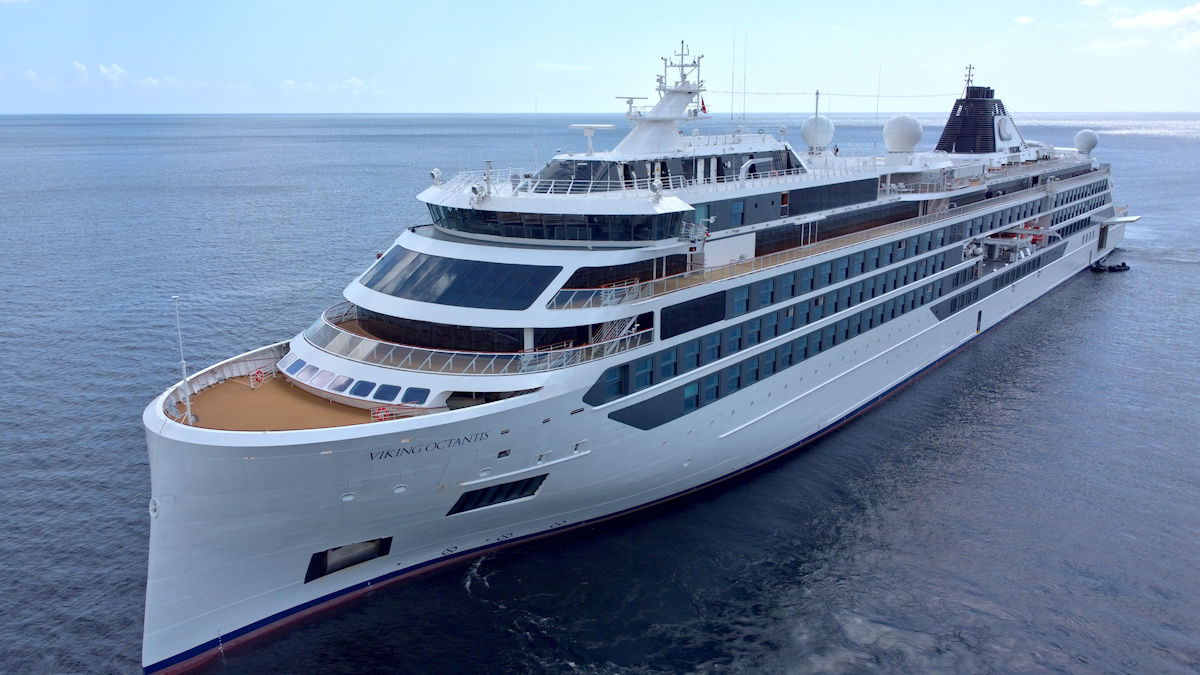 I'm a licensed commercial drone pilot (FAA part 107) so Viking allowed me to fly my drone from the top of the ship.
I was able to get a lot of really good aerial shots of the ship! 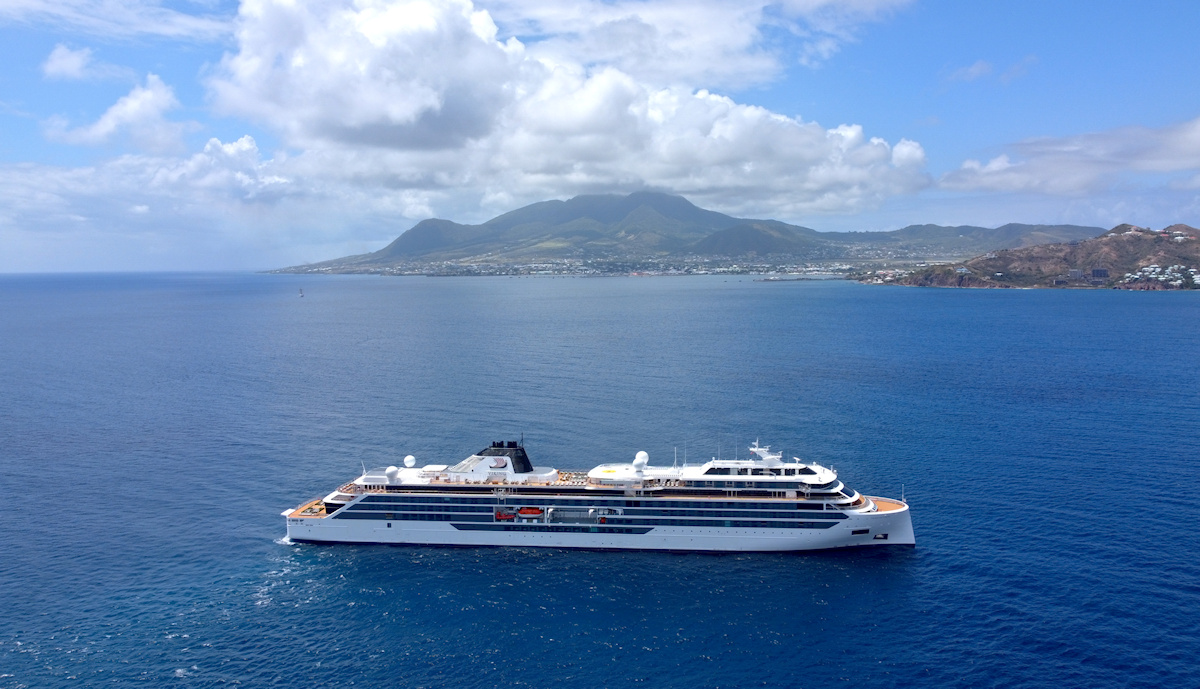 Viking Octantis off the coast of St Kitts 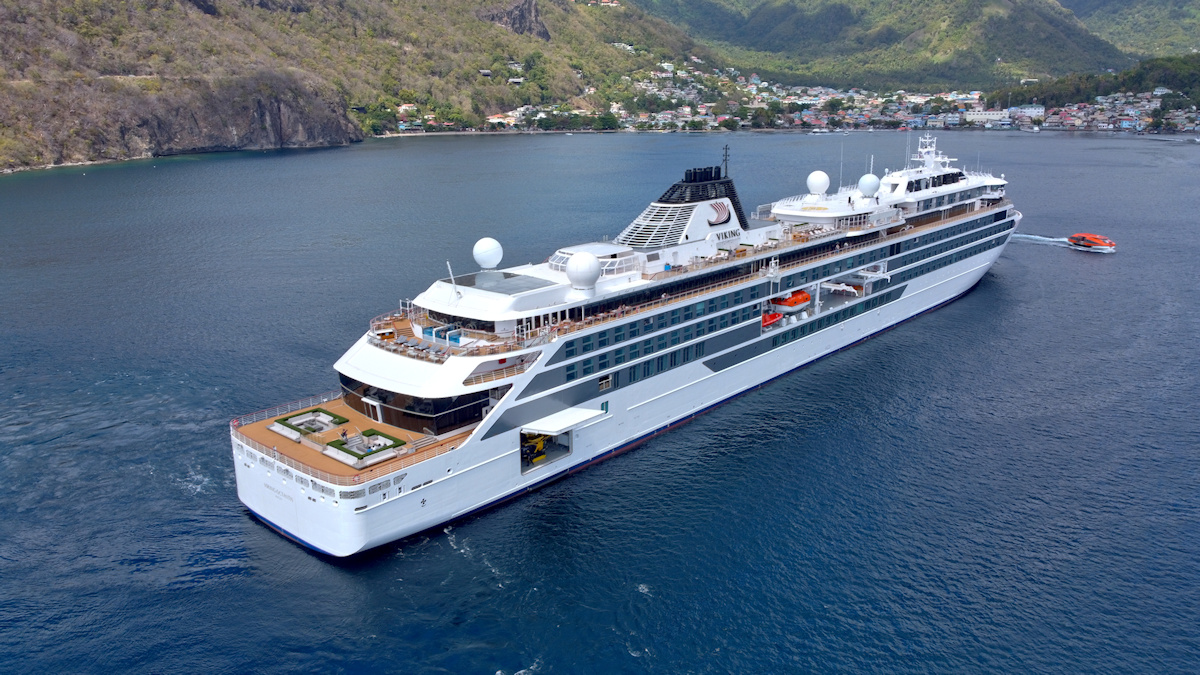 Viking Octantis just offshore of the island of St Lucia

One of the most interesting aspects of our cruise on Viking Octantis is that I got to meet the founder, chairman, and CEO of Viking, Torstein Hagen.  He's a really interesting guy, and I was so fortunate to have the opportunity to hear him speak several times during the cruise...  and I even got to have about a ten minute one-on-one conversation with him.  Here's a video I made about that:

One of the coolest things about Viking Octantis is all the toys that are onboard!  There are kayaks, zodiac boats, special operations boats, and even two submarines!  There is no extra charge to use any of them. 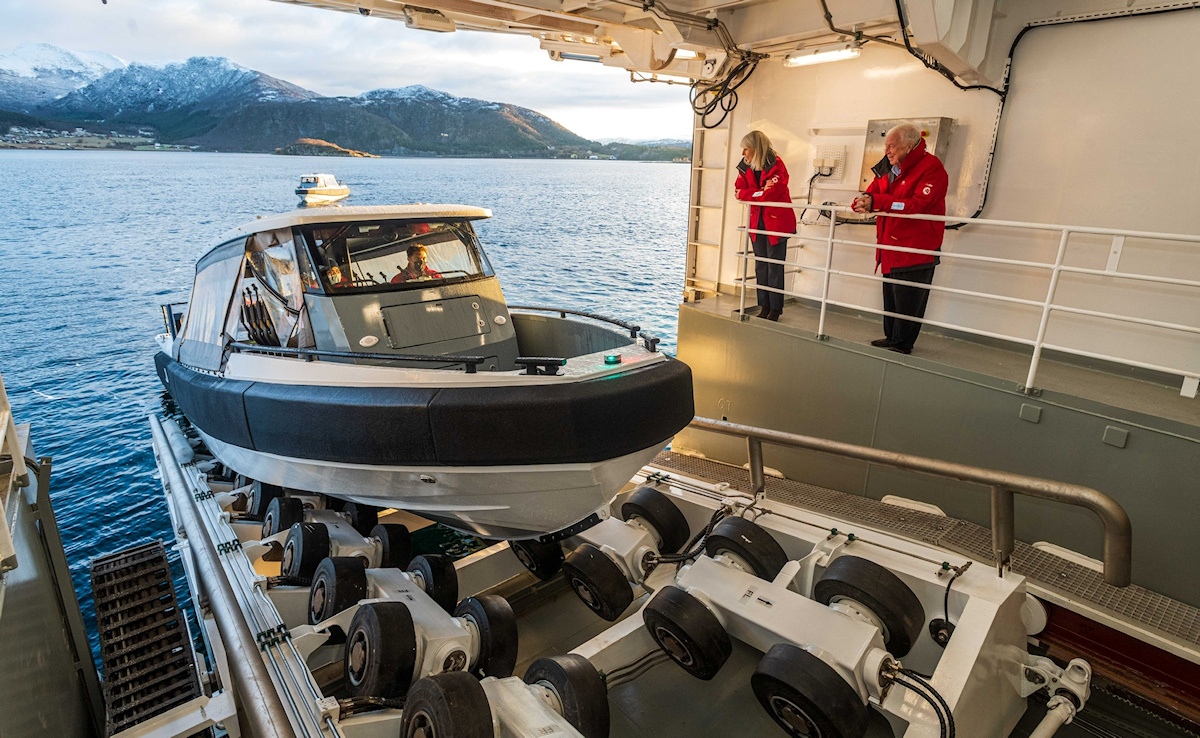 That's Viking's Chairman, Torstein Hagen, and his daughter, Karine, watching the launch of the special operations boat out the back of Viking Octantis.
The photo was supplied by Viking, and I presume it was shot in Norway. 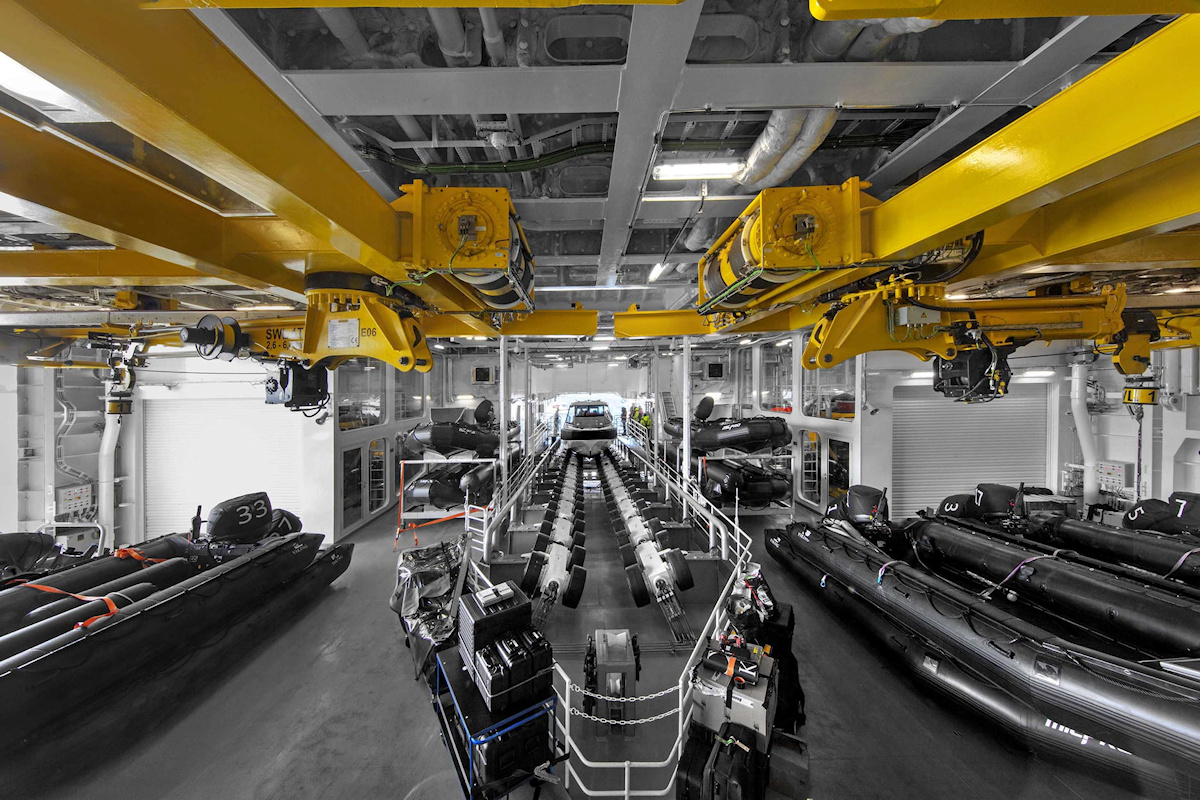 "The Hangar" where are the Zodiacs are stored, and where you board the special operations boat prior to launch down the slipway

Here's a video I made about a ride I took to the floor of the Caribbean on one of the submarines:

Because Viking Octantis is so much smaller than most cruise ships, she isn't restricted to only visiting the big port cities that have giant docks.  In fact, more often than not, an expedition ship like this doesn't use a dock at all...  it just "parks" offshore of wherever it wants to visit, and stays in place using a dynamic positioning system.  The ship has anchors, but almost never uses them because it's a lot better to just use the dynamic positioning system to keep the ship in one place. 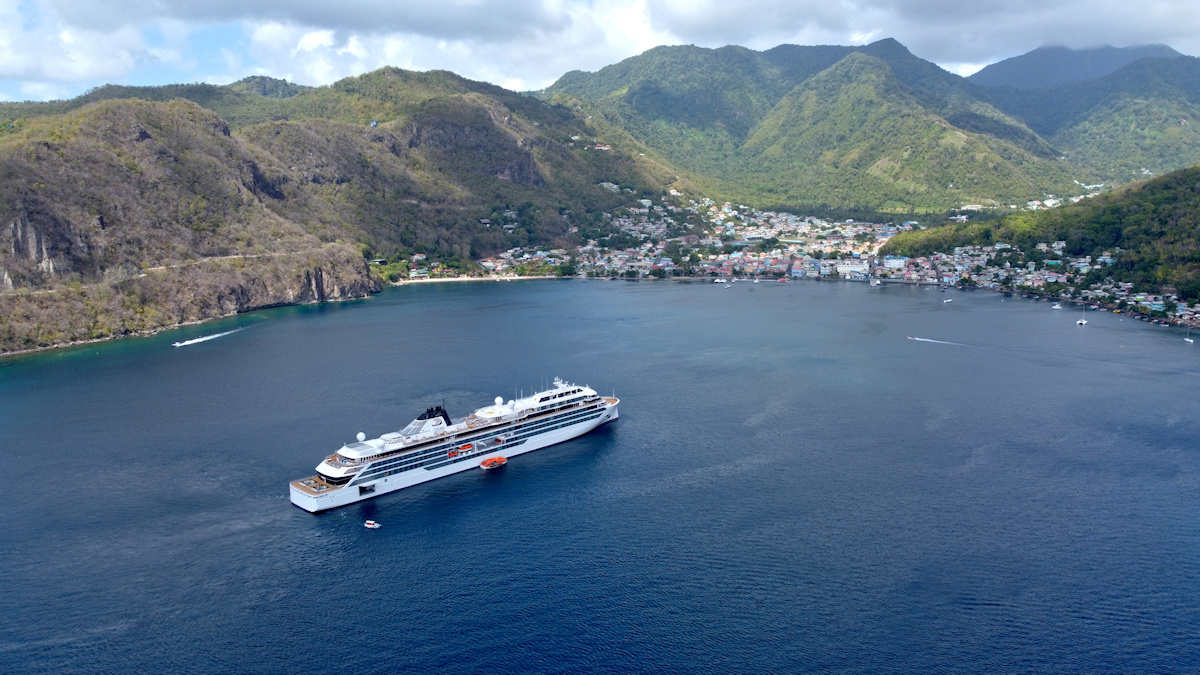 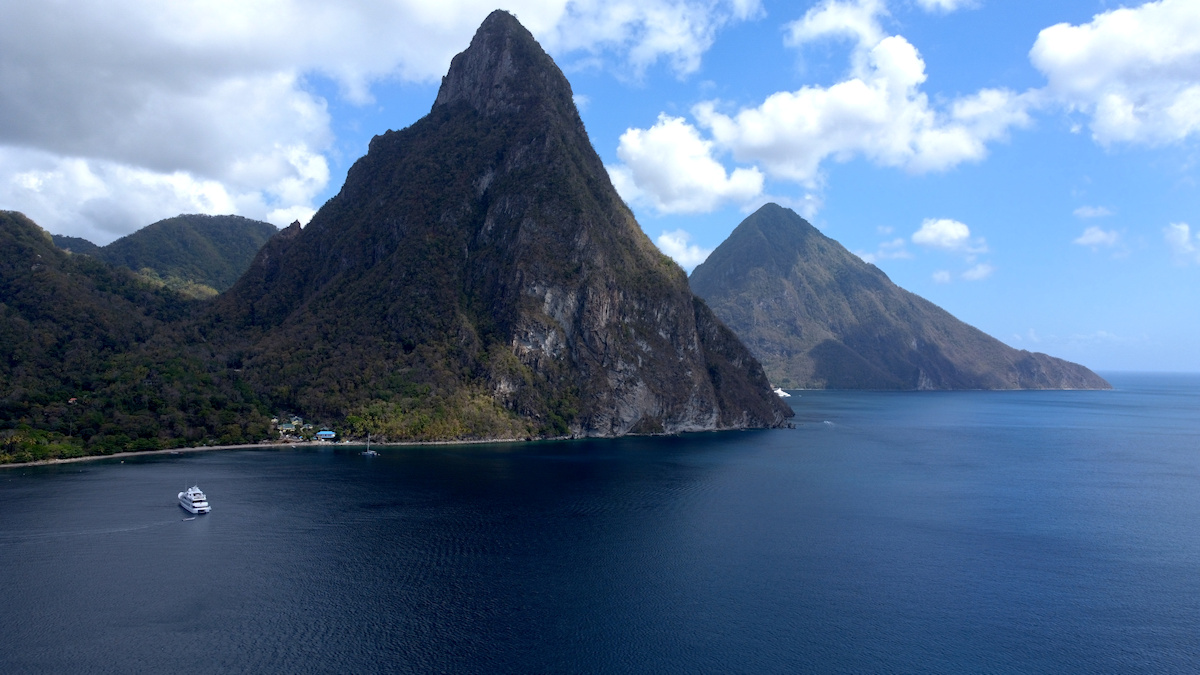 From roughly the same place I took that last shot, I swiveled the drone to the right
to get this shot of St Lucia's most iconic feature, The Pitons

There are a lot of special features on Viking Octantis which were designed specifically for times when the ship is cruising in the polar regions of the world.  For example, here's a protected area at the bow of the ship: 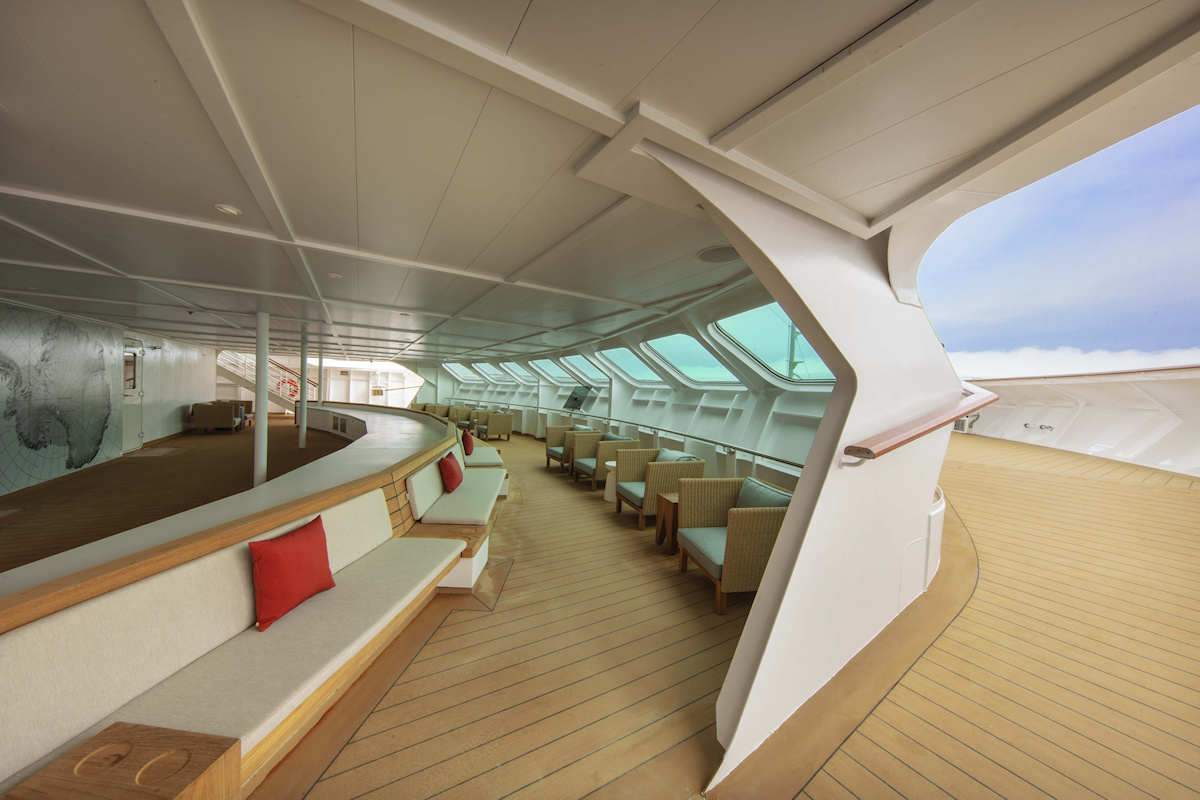 There's also a unique viewing area inside the bow of the ship, with very thick windows that look out each side of the ship.  From a comfortable lounge inside the bow, you can look out these windows and see the waves splashing up along the side of the ship when the ship is in motion.  It's especially dramatic when the ship is sailing in rough seas.  In this next picture, the arrow points to the starboard side windows that I'm referring to. 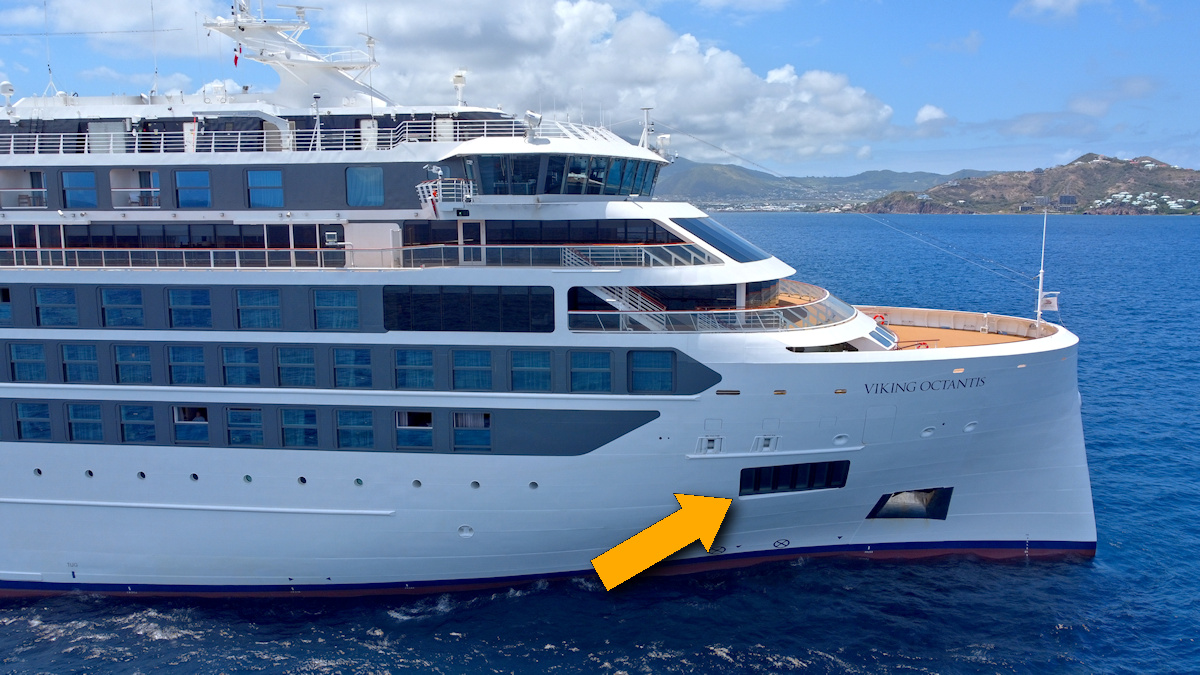 The lounge inside the bow of the ship, with windows looking out both the port and starboard sides of the bow, is somewhat hidden...  deep within the bow of the ship, and a little tricky to find.  This lounge is known as "The Hide"...  and I don't know if that's because it's a bit hidden, or if it's because it's a great place to hide out.  Maybe a little bit of both.  This is where I stumbled upon Viking's Chairman, Torstein Hagen, and ended up having a really interesting ten minute chat with him.

Here's an interior view of a portion of The Hide... 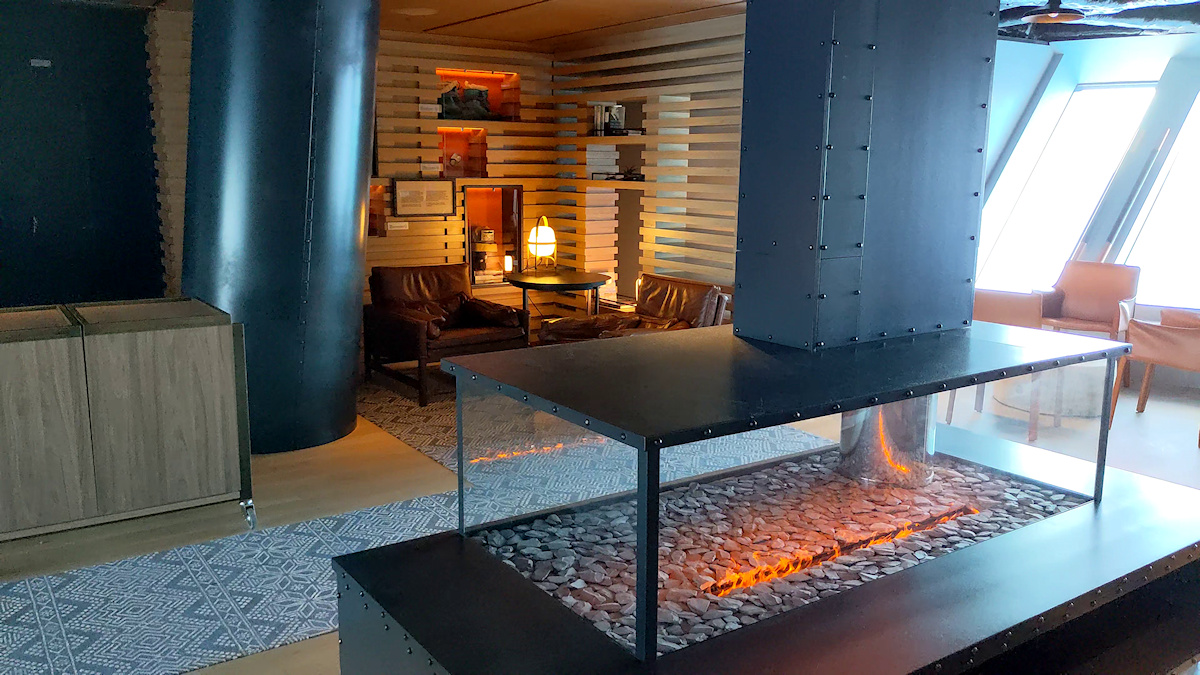 On the right, you can see the windows on the starboard side of the bow.
That black tube on the left side of the picture houses the chains for the ship's anchor.

Viking Octantis is specifically designed for cruising in Antarctica and other remote parts of the world.  The ship had spent two months cruising in Antarctica during the Southern Hemisphere summer, and then spent April repositioning to the Northern Hemisphere for summer there.  We boarded the ship in Barbados, spend six days cruising in the Caribbean, and then three days sailing north to New York City.  Here's a picture I snapped with my Canon DSLR camera as we sailed past the Statue Of Liberty on our way to the Manhattan Cruise Terminal at the completion of our journey... 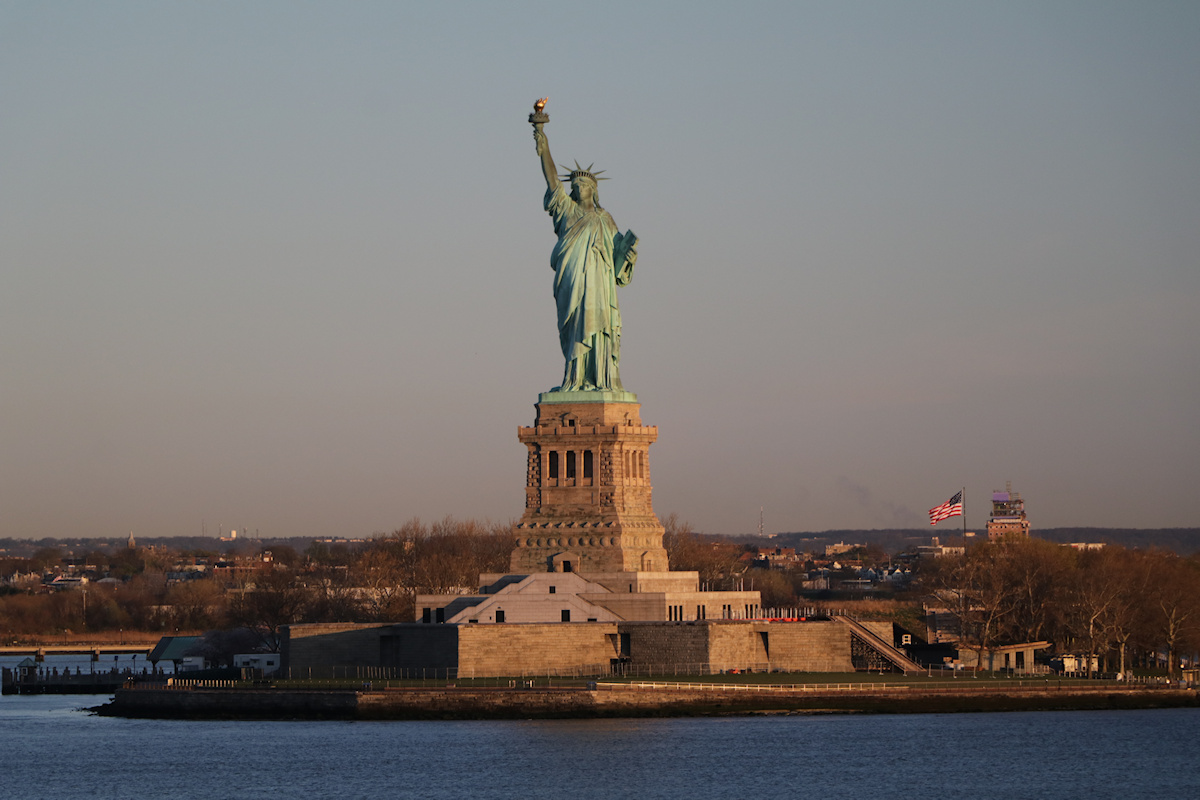 Even though we didn't sail in Antarctica, I thought I should include a couple of photos (supplied by Viking) of Viking Octantis during her inaugural season at the bottom of the world... 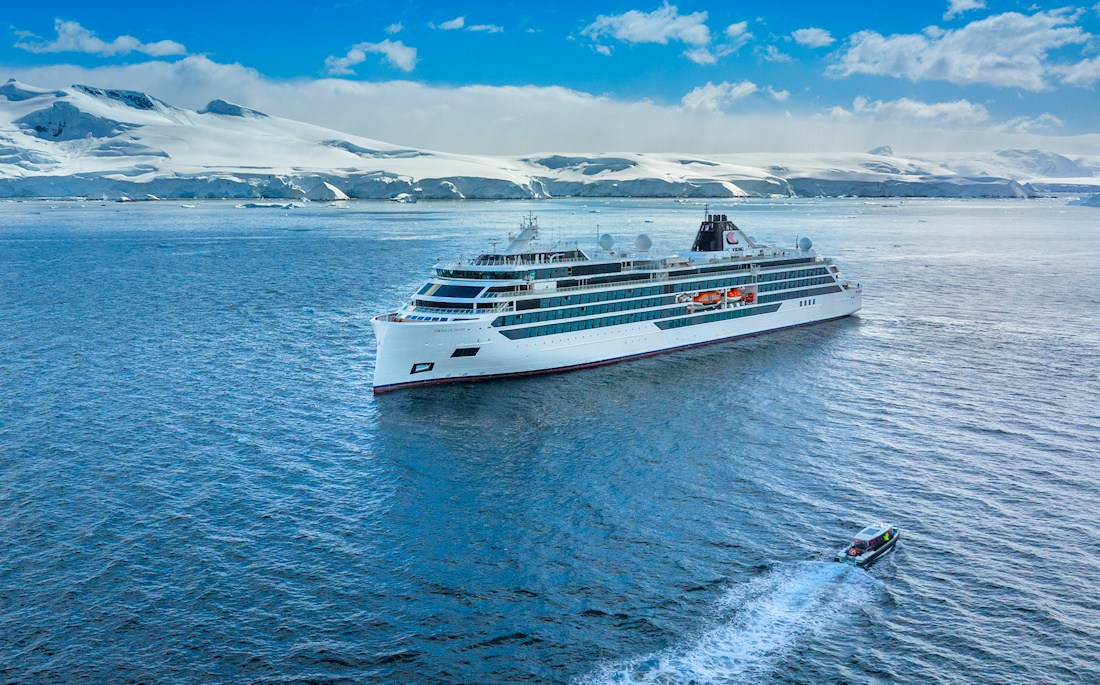 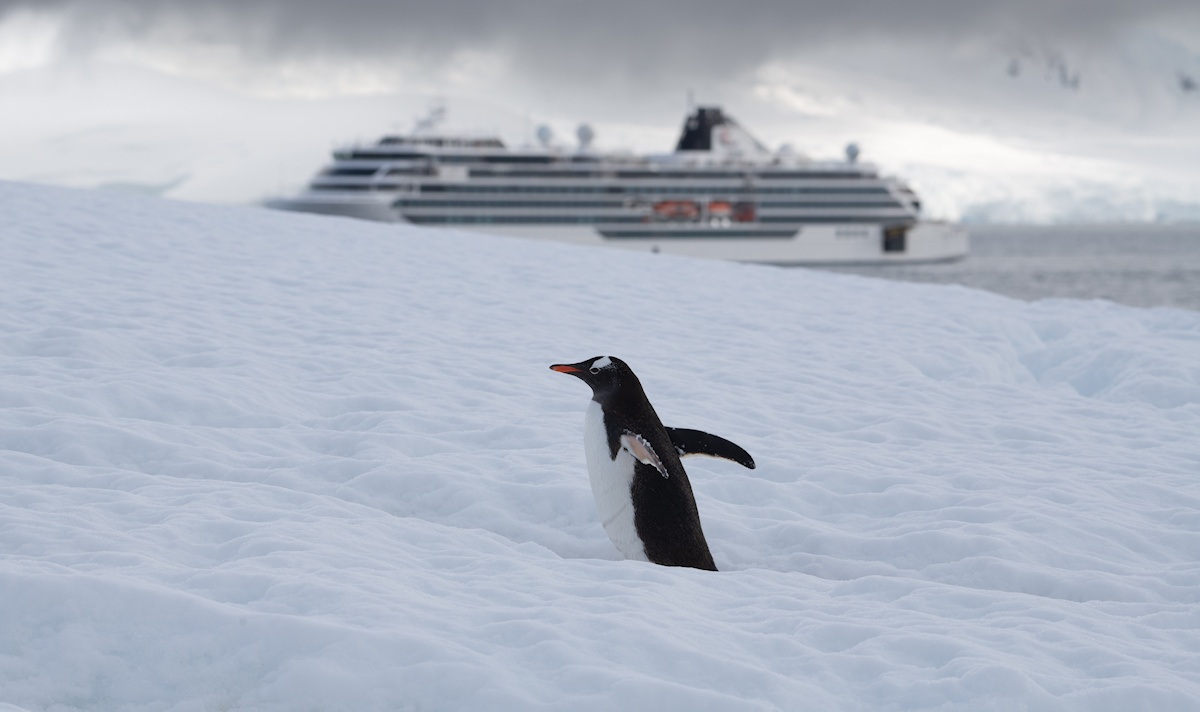 I doubt that Viking will ever offer me a free cruise in Antarctica, because those cruises are very much in demand.  But I sure would like to do one someday, and maybe at some point I'll decide it's worth spending my own money to do it!

The quality of Internet access during our cruise on Viking Octantis was particularly bad...  among the worst connections to the Internet that I've had on a cruise ship in the last 20 years or so.  If we had been sailing in Antarctica, that wouldn't have surprised me...  but sailing in the Caribbean and sharing the connection with only about 325 other passengers, I expected much better.

Here are the results of a speed test on our last sea day in the Atlantic, a day before arriving in New York.  While there were times during the cruise where it was a little better than this, these results were fairly representative of what I experienced during most of the cruise.

I'm sure that someday, perhaps when Elon Musk's network of satellites is fully operational, we'll shake our head and laugh at the Internet speeds on cruise ships back in "the old days".