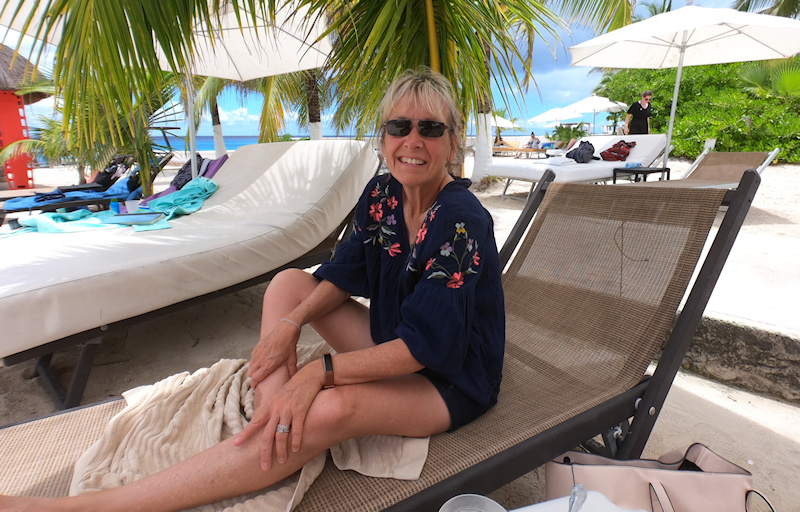 To celebrate my wife's 60th birthday, we took a 6-day Caribbean cruise on Carnival's latest ship, Carnival Horizon.  This page has a few still photos from that trip, and all the YouTube videos I made about it.

We live in California and this cruise was out of Miami, Florida...  so there was a travel day just for us to get to the Port Of Miami.  Somewhere over the course of our travels in the last few years we decided that flying in coach was kind of painful and we vowed to only fly first class after that.  So, our coast-to-coast flights these days are a lot more fun than they probably are for most people.  Here's a video I made about our trip from California to Florida...

From our suite in the Intercontinental Hotel, we had an amazing view of the Port of Miami.  Here's a photo of the sun rising over the cruise ships, which I shot right out our hotel room window. 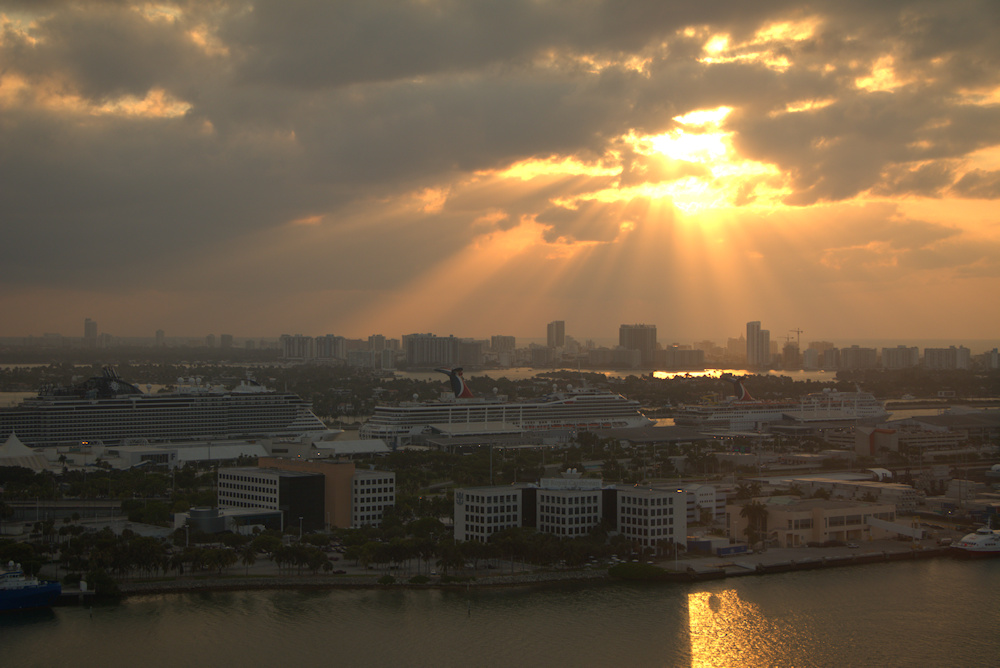 From that vantage point, I was able to make an interesting time-lapse video of the cruise ships sailing away:

This next video tells all about our cruise, including what I liked about it and what I didn't like:

We booked a very unusual cabin at the back of the ship.  It actually had the largest balcony of any cabin on the ship!  Here's a photo of Kellyn relaxing on our balcony and enjoying the view.  What you're seeing in this photo is actually only about a third of the balcony, which wrapped all the way around the back corner of the ship. 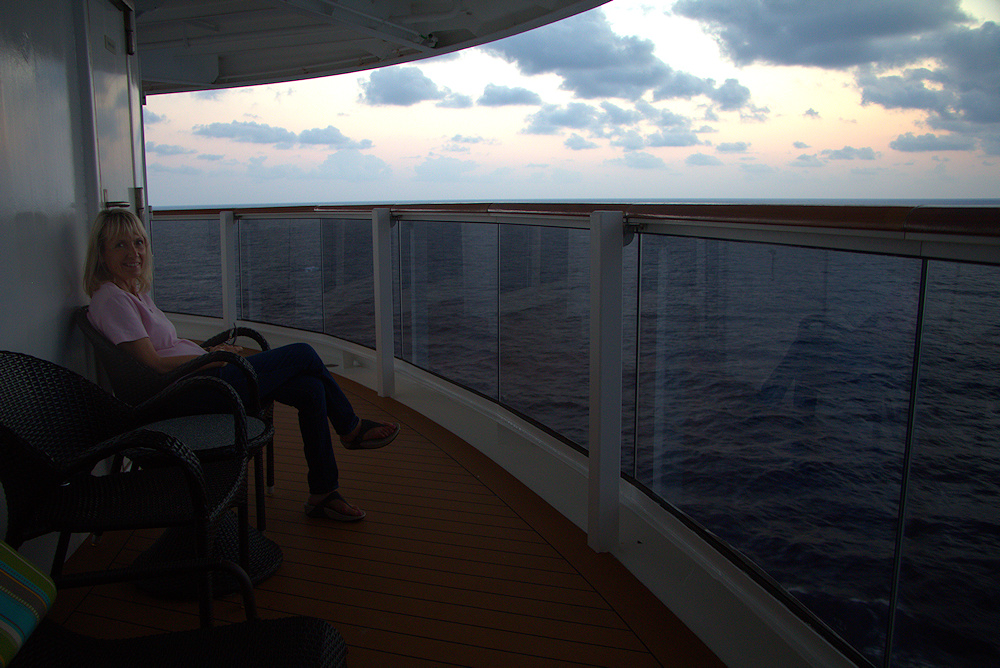 In the upper left of that last picture, notice that the deck above provided cover, shade, and privacy for our balcony.  The people looking out from the deck above us could not look down on to our balcony.  However, from our balcony, we did have a view of the honeymooners staying in the cabin below us... 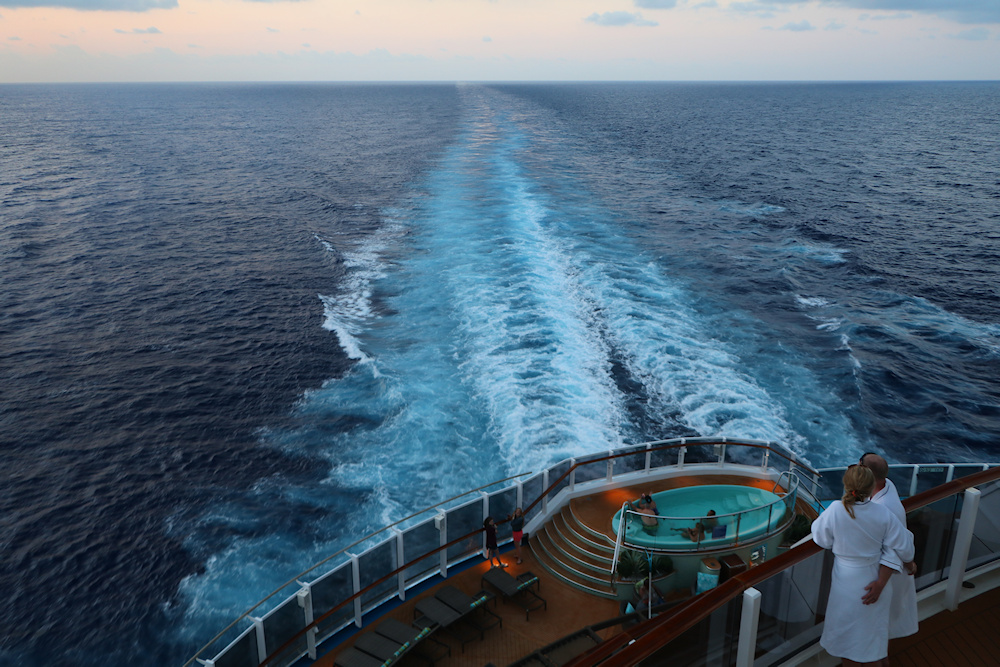 This video tour of our cabin does a lot better job of showing you how amazing our balcony was...

A highlight of the cruise was a day we spent visiting two of Jamaica's top tourist attractions.
Here's a video about it...

Here's a video that shows the full ride on the Jamaican bobsled, with no narration...

Another good shore excursion we enjoyed during this cruise was an all-inclusive day at "La Casa En La Playa" in Cozumel.
Here's a video about it:

We enjoyed the entertainment on the ship, including this sweet couple that call themselves the Blind Summit Duo:

I was also impressed that Carnival was not trying to keep entertainment costs low by just hiring some cheap Philippine cover band.  They actually had a 8-member band of Americans, including a horn section.  It costs a lot more to pay eight American band members than four guys from the Philippines...  so I was impressed. 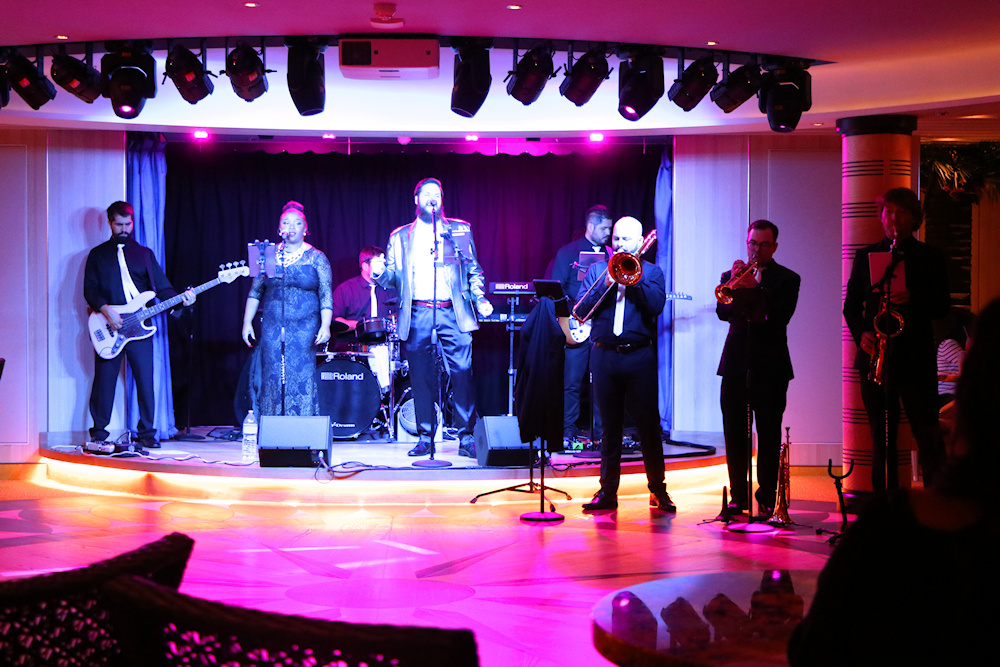 On some of our previous Carnival cruises, we've seen four different comedians perform during a 7-day cruise.  For this cruise, however, they only had two comedians...  which may have had something to do with the fact that this was a six day cruise, not a seven day cruise.

Internet access on Carnival Horizon was mostly OK, but not great.  Royal Caribbean has the best Internet access because they have a deal with O3B Networks, which uses a series of low-orbit satellites to provide Internet service.  Most other cruise lines, including Norwegian, use satellites that are in a higher orbit around the earth, which creates more latency in the signal, and slows down the feel of accessing the Internet.  I did frequent speed testing use Speedtest.net to measure how good the Internet service was on Norwegian Breakaway, and the results varied quite a bit from day to day, but here is a typical result:

You can tell from the ping test that Carnival Horizon was using a satellite in a high orbit around the earth.  On Royal Caribbean, using the O3B network, that ping number would be several hundred milliseconds faster.  Of course, if you were at home, using a cable modem, the ping number would be ridiculously small...  like 6 or 10.  That's one of the reasons that the Internet feels so responsive at home...  low latency, as measured by the ping time.

Download speeds were OK for a cruise ship, but nothing to write home about.  Upload speeds, however, were fairly slow...  so I didn't upload large HD videos from the ship to my YouTube channel, I waited until we got ashore.

Here are links to a couple of pdf files that I think you would find useful:

All 6 Carnival Horizon Daily Newsletters  (known as the "Fun Times")

Benefits of being Platinum in Carnival's Loyalty Program