I found out in December 2000 that I had lymphoma, or in other words, cancer of the lymphatic system.  My particular case was extremely rare in that I had a combination of both Hodgkin's AND non-Hodgkin's lymphoma.  To give you an idea of how rare that is, I saw three Oncologists (cancer doctors) and not one of them had ever treated a case like mine in their entire career.  My Oncologist finally had to consult with an expert at the medical center at the University of California in San Francisco to come up with a treatment plan.  The expert at UCSF said he sees about one case per year like mine. 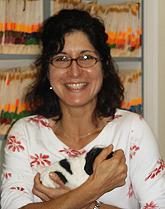 How did I discover that I had cancer in the first place?  Well, it turns out that I'm a very lucky guy!  I was scheduled to have some surgery to alleviate sleep apnea, and had a pre-op visit with my ear/nose/throat doctor, Dr. Lisa Molin.  Dr. Molin performed a routine examination of my neck to check for any swelling in the lymph nodes, and discovered an unusual bump in my neck.  It was so small, that I had not even noticed it myself...  but Dr. Molin recognized right away that it was odd.

To make a long story a bit shorter, Dr. Molin did a biopsy of the bump in my neck, and determined that it was a cancerous tumor.  Her early detection of this tumor made my little battle with lymphoma a lot easier than it would have been if that tumor had been allowed to grow and spread.  Dr. Molin is my special hero!  To show them my appreciation in the years following my cancer diagnosis, I would often take a litter of puppies over to Dr. Molin's office at the end of the day to cheer up the good doctor and her staff.

In December 2000 and January 2001 I underwent a series of tests (including two CT scans and a bone marrow biopsy of the pelvis) to determine if the cancer was localized in my neck or had spread elsewhere.  The good news was that the tests showed no evidence of any cancer anywhere else besides in my neck.  While it was, of course, alarming to know that I had cancer, I was able to keep a very positive attitude since my doctors assured me all along that I would make a complete recovery.

In February 2001 I finally began my cancer treatments...  starting with chemotherapy.  Within a few weeks, my hair was falling out in clumps...  so I decided it might be better just to shave my head rather than lose it over a period of days or weeks.  This was my first new hair style in 43 years!  (It's been a running family joke that I've done my hair exactly the same ever since I was a child.)  During my chemotherapy I was able to do a darned good impersonation of either Captain Jean Luc Picard from Star Trek or Dr. Evil from Austin Powers...  as you can see from the following pictures:

(That's the real me in the center)
The picture on the right is my face on Dr. Evil's body.

While most cancer patients have six or eight rounds of chemotherapy -- and some have many more -- I was lucky and only had to have a total of three.  I got off easy since they caught my cancer so early and it had not yet spread.

Chemotherapy was an experience I will not soon forget!  The first and third rounds went better than expected, with only six days where I was really experiencing bad side effects...  but round two was a real nightmare.  It got off to a bad start on the very first night, and it went downhill from there!  I ended up spending three days in the hospital with pneumonia.  (The chemotherapy weakens your immune system and makes you vulnerable to all sorts of interesting ailments.)  Luckily, my wife took very good care of me, and she made my hospital experience SO much easier than it would have been without her.

After completing the three rounds of chemotherapy, I began a series of direct radiation treatments.  Compared to chemo, the radiation treatments were easy!  I had treatments every weekday for four weeks, and I was in and out of the doctor's office each day in less than fifteen minutes.  It took longer to drive there than it did to be treated! 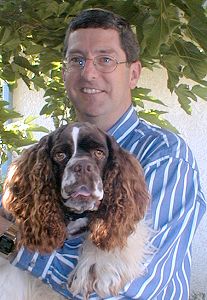 Here is a July 2001 picture of me...  all smiles with the cancer ordeal behind me.  From this angle, you couldn't see the goofy bald patch I had on the back of my head at that point...  so the new hairstyle didn't look too bad.

Once I had the chemotherapy and radiation treatments behind me, I had CT scans every six months for the next few years to make sure that no cancer remained.  Finally, after five years had gone by with no sign of the cancer returning, I've declared victory and moved on.  The only thing I have to do on a continuing basis is to have occasional blood tests to check the function of my thyroid...  which may have been damaged by the radiation treatments.  So far, no signs of problems.  I'm definitely glad to be cancer free...  but I have to be honest with you and say that I actually ENJOYED my cancer experience.

Enjoyed it?!?  Perhaps I better explain.  Because of my cancer treatments, I took a leave of absence from my job with Pacific Gas & Electric Company for the Spring and most of the Summer of 2001...  and it was really nice to not have to go to work for several months.  It allowed me to pursue a few interests that I hadn't previously had the time for. 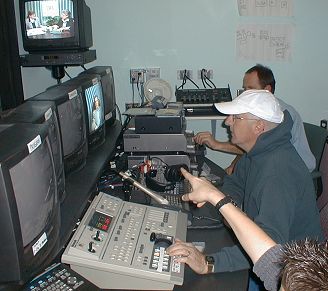 My son, Jeff, had been volunteering at the local cable TV company's public access TV studios...  and since I did the very same thing almost 30 years ago, I was getting a little jealous of all the fun he was having.

So one night he let me tag along with him and help out with a live broadcast.  He directed the show, and I got to run the video switcher.  It was incredibly fun to do again after 30 years, and the show went well.  For the next few months we did the show together each week as a father/son control room team!  In the picture you can barely see Jeff in the lower corner calling out shots while I operate the controls.

About my hat...  during my chemo treatments, I never left home without one!  If you had the Kojak/Picard/Dr. Evil look, you'd wear hats, too.

There is a LOT more to this web site than just this page!
Please explore the rest of the site by viewing our table of contents,
or by clicking on one of the quick links below.