We bred Cocker Spaniel puppies from 1995 up until 2010 and during that time we had a very active online community of Cocker Spaniel lovers that socialized on a forum on my web site.   It was a fun group of people from all over the United States, and every now and then some of us would get together in person for a play date with our dogs.  We would call those doggie play dates "Pupapalooza".  Basically, I would pick a date and a location at some park or beach near our house, tell our group that I was having a Pupapalooza that day, and a lot of them would make a weekend of it, drive to my little town, and we'd have a fun little doggie play date.  These Pupapaloozas got bigger and bigger over the years.

In 2009, I decided to take it to the next level.  I informed the group that Kellyn and I would be sailing on the Carnival Elation, and put out an open invitation for anyone from our online group to join us.  Without their dogs, of course!  I called the event "Cruise-A-Palooza".  We ended up with a group of nine on our cruise, and it was a LOT of fun...  especially since I was the only guy in the group!

We had a LOT of fun on Cruise-A-Palooza and it was all because we had a nice group of people that all genuinely liked each other.  It helped that we had Cocker Spaniels in common, but we certainly talked about a lot more than dogs during the cruise!

Here's a photo I snapped of some of the ladies on embarkation day.  They knew that their cell phones wouldn't have a signal once we set sail, so they were doing one last check before we set sail.  Keep in mind that we all knew each other from an online group, so we were all pretty addicted to the Internet and social networks!

The cruise was a five-day cruise out of San Diego, California.  Someone snapped a photo of me and Kellyn, with the San Diego skyline in the background, as the ship pulled away from the dock and our cruise officially began... 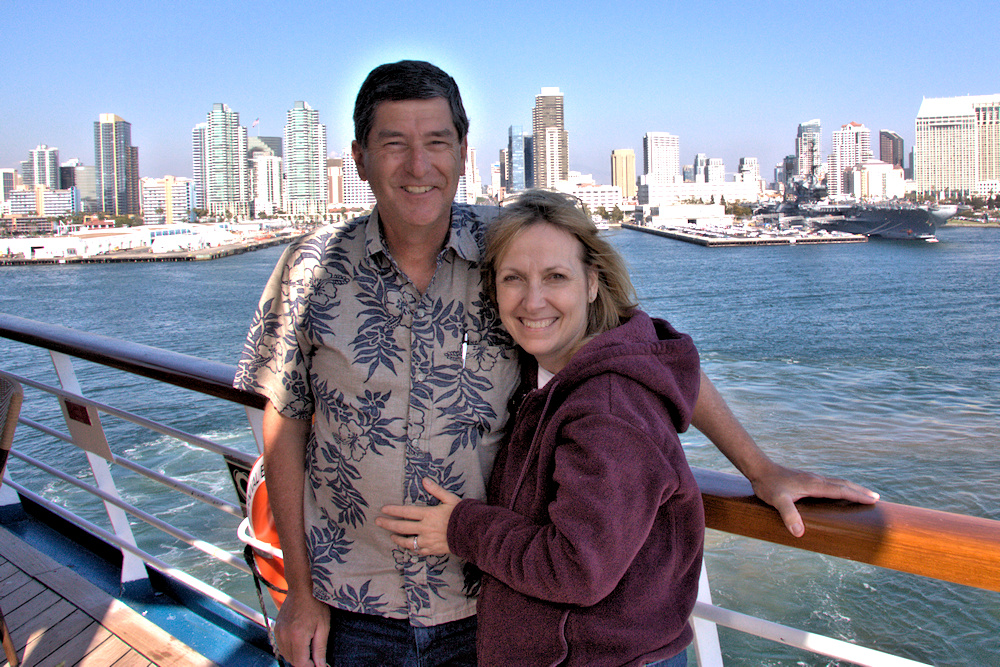 That really wasn't a very good photo of Kellyn, but thankfully a better one was taken a moment later... 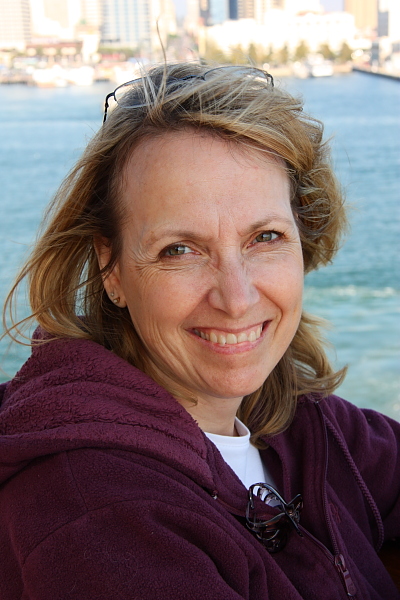 The cruise was a 5-day cruise to Cabo San Lucas.  Two sea days to get there, one fun day in Cabo, and two more sea days to get back.  The sea days are fun, especially when you are cruising in a group of people, because it gives you hours and hours to hang out together by the pool and chat.  Up until this point, Kellyn and I had never cruised in a group...  just ourselves.  So this was a fun new cruise experience to have all the fun time together socializing with our friends.  Cathie Laurent snapped a photo of some of us hanging out together by the pool, and I really love this photo because it just captures a little slice of cruise ship life. 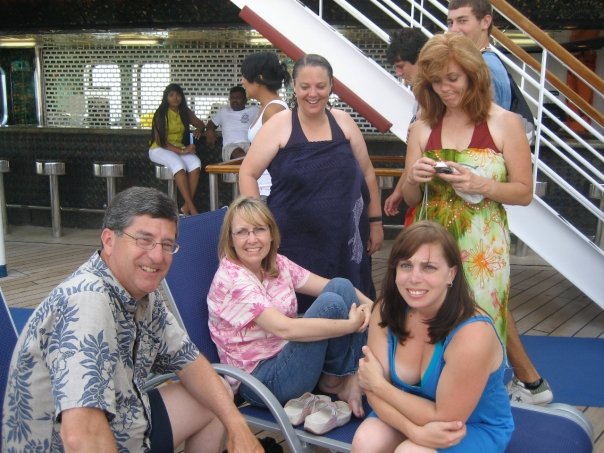 Here's a photo of the ship at anchor just off shore of Cabo... 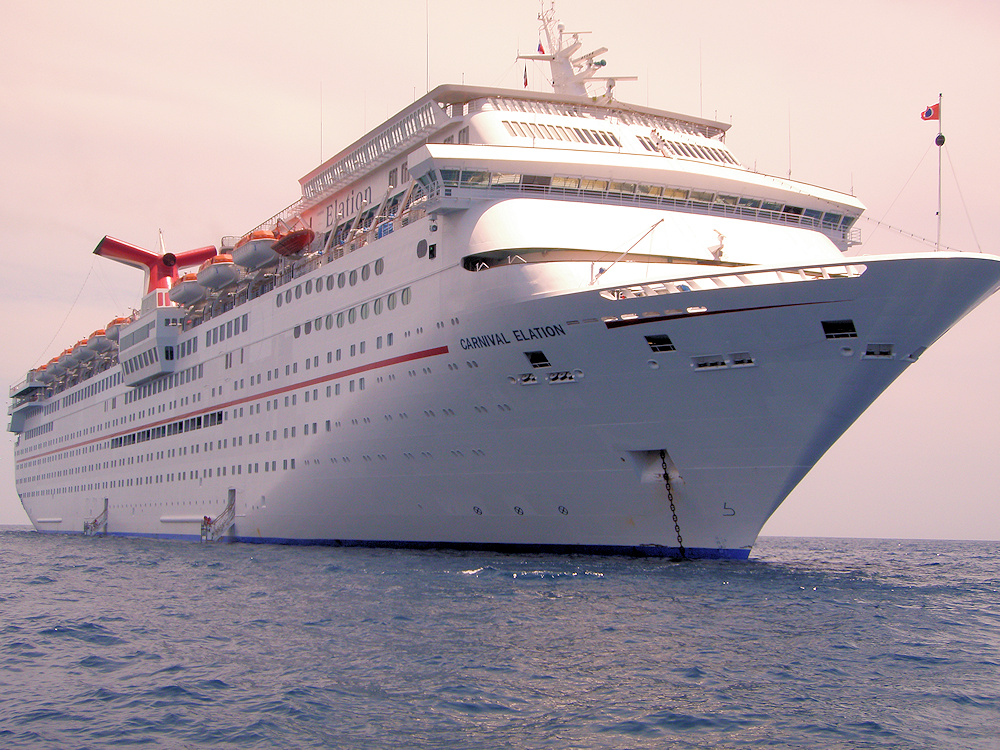 I shot that photo from a "Cabo Tender"...  one of the little boats that transfers you from the cruise ship to the dock at the marina in Cabo.  There is no pier big enough to accommodate a cruise ship in Cabo San Lucas, so this is the way you get ashore. 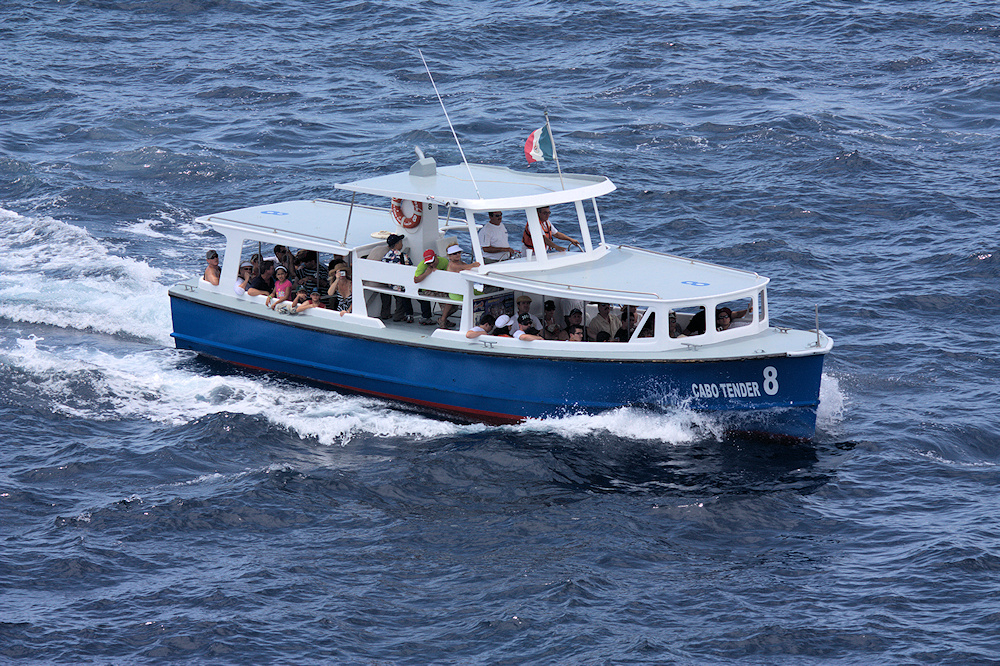 In 2009, I hadn't become successful on YouTube yet.  My first viral YouTube video didn't come until about three years later.  In those days, I considered myself more of a photographer than a videographer.  I enjoyed trying to take nice photos of the ships I cruised on.  Here's one of the Carnival Elation at night... 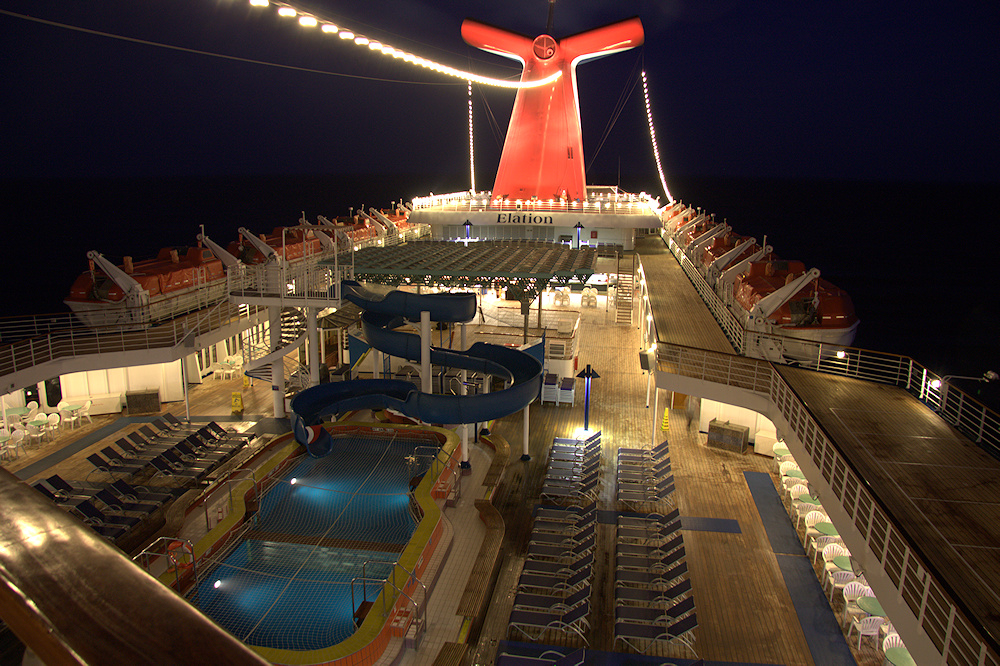 And here's one at sunrise... 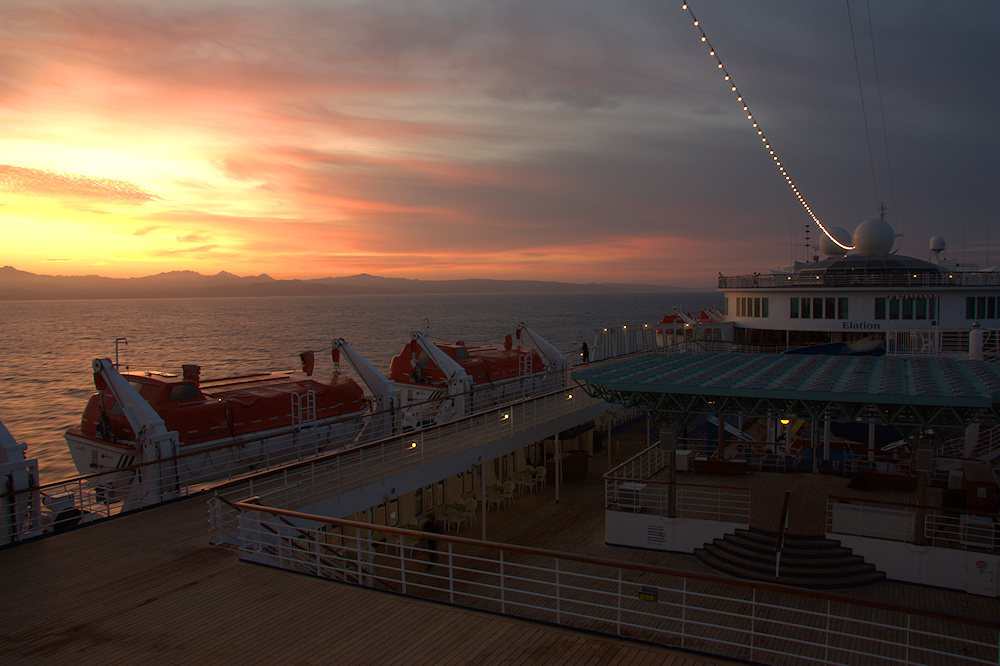 And then there's this spectacular shot, taken while parasailing! 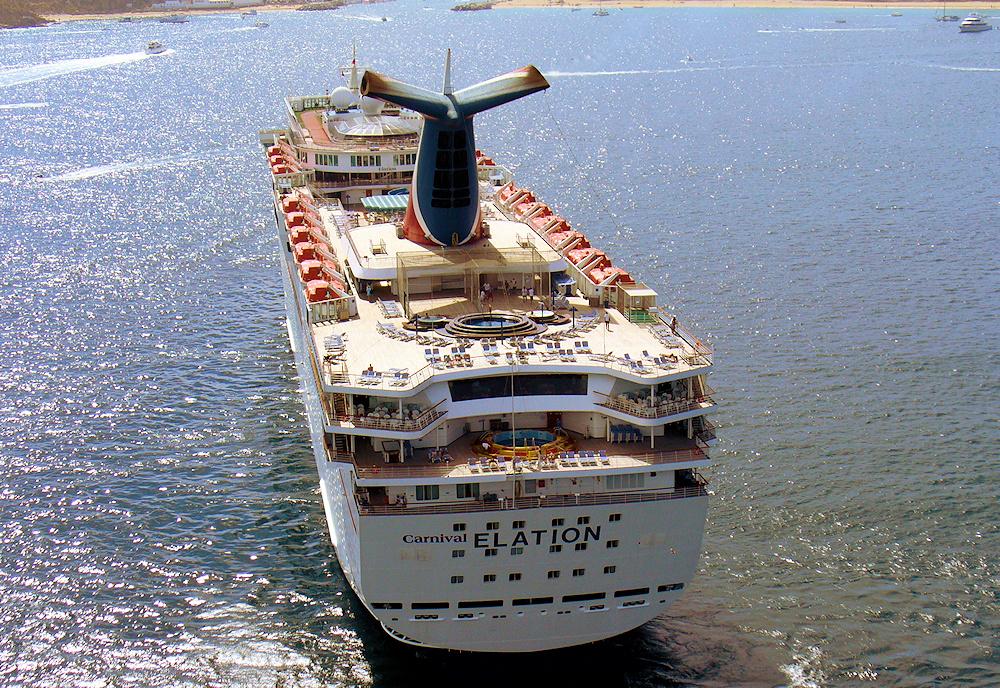 But the truth is that I can't take credit for that parasailing shot!  I didn't shoot that one.  I downloaded that one off the Internet.  I just like it because it's such a unique view of the ship!  A year or two later, I did try parasailing and tried to get a great shot of our cruise ship, similar to that photo.  But mine were nowhere near as good!

Cabo San Lucas is a lot of fun, and there's so much to do there!  I like it because it's basically the closest place to California with extremely warm ocean water.  People that don't live in California and come for a visit are surprised to find out how cold the ocean water is in our state!  But in Cabo, the ocean water is typically about 80 degrees.  So, the beaches are quite popular. 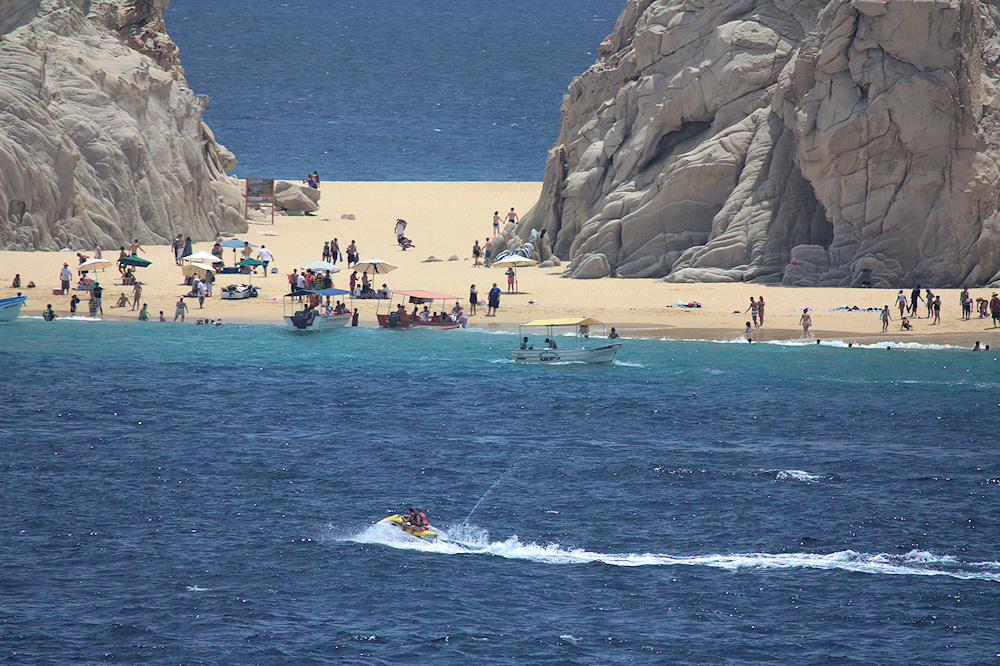 Cabo is also a true party town, and very much oriented towards showing tourists a good time.  There are lots of bars and restaurants, of course.  One of my favorite restaurants there is a casual little place on the beach called "The Office".  The tables are located under big blue umbrellas on the beach, and they have fantastic traditional Mexican food there. 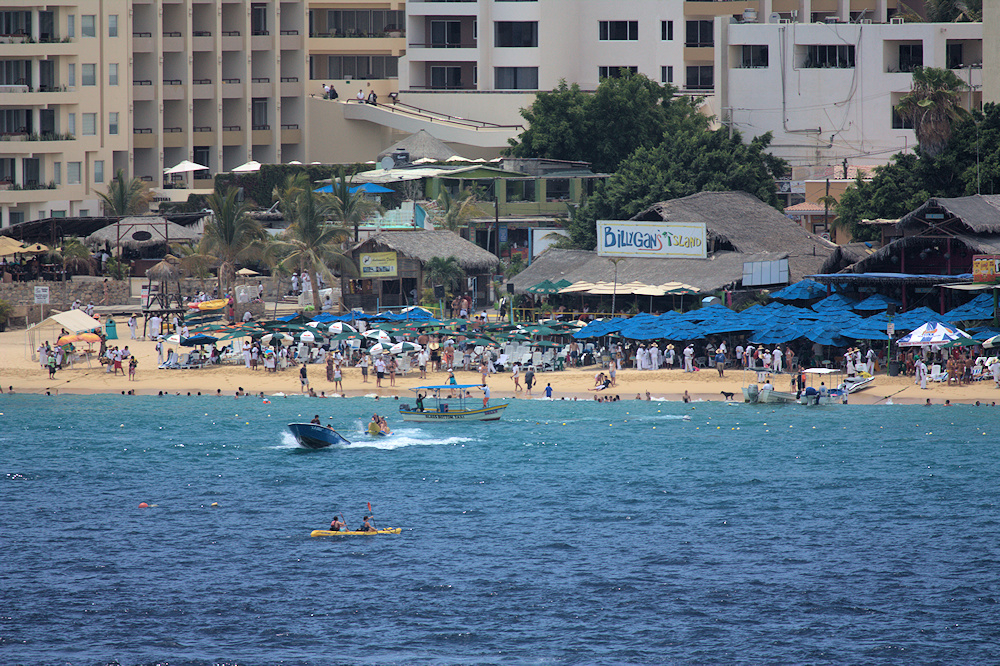 While we were in Cabo, all of the folks in our group were free to do whatever they wanted...  and I think the nine people in our group split up in to three mini-groups that day.  Three of us wanted to get in to that warm ocean water, and I think the others were more interested in exploring the town.  For us water lovers, we decided to try Snuba.  It's kind of like snorkeling with an air house...  or like scuba without the tanks.  Our guide wore actual scuba tanks... 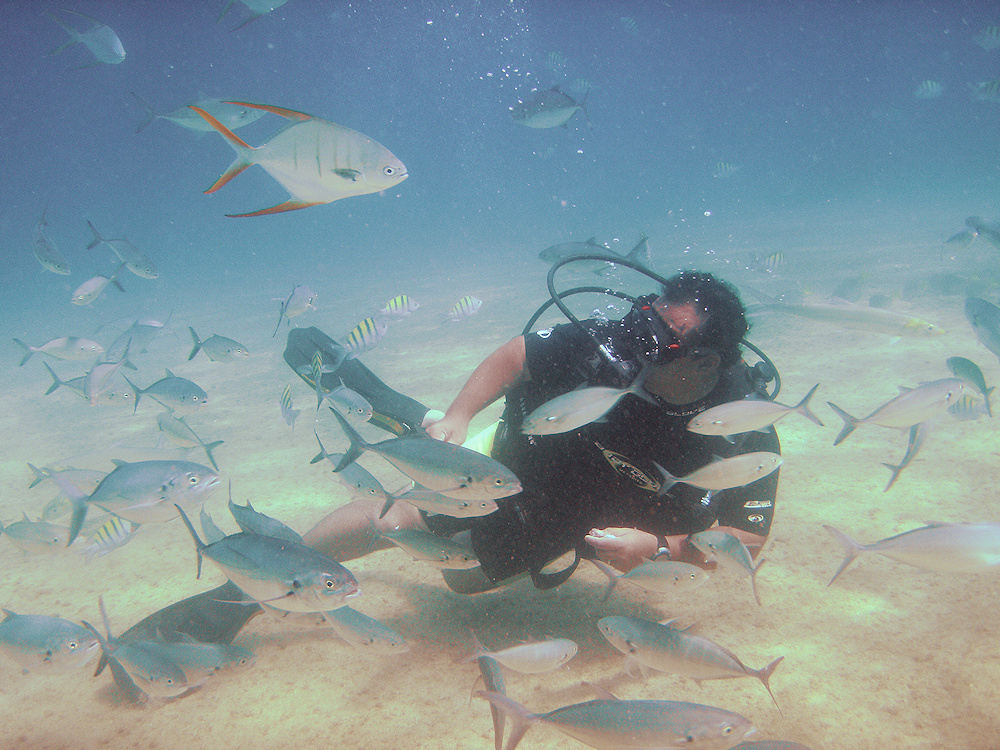 But we didn't need tanks (or scuba certification courses) because we just breathed through an air hose connected to an air supply system floating in a boat above us.  Kellyn snapped this photo of me with my waterproof camera... 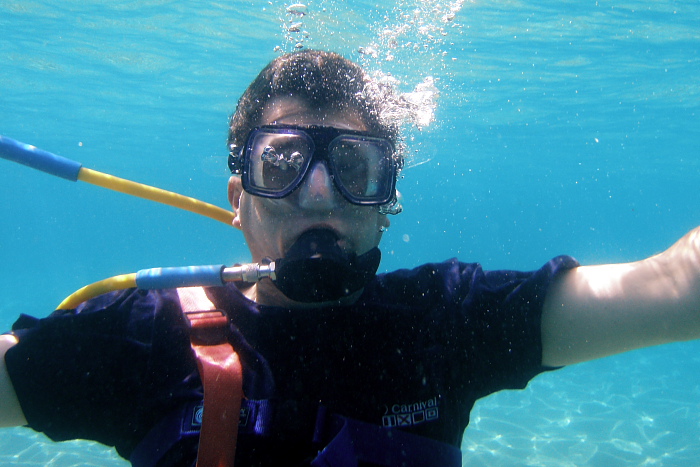 And then I snapped this photo of her... 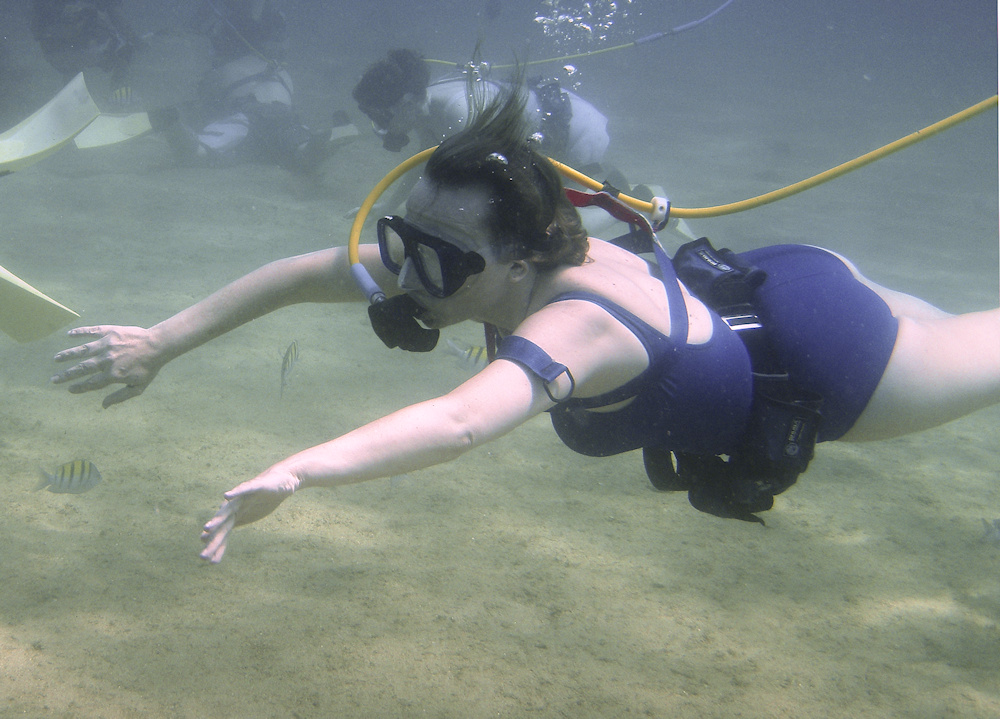 Here's a photo of a cute towel animal that our cabin steward made for us...

Since our group was all dog lovers, several of the girls had special t-shirts made up about a special martini for dog lovers, known as a PawTini... 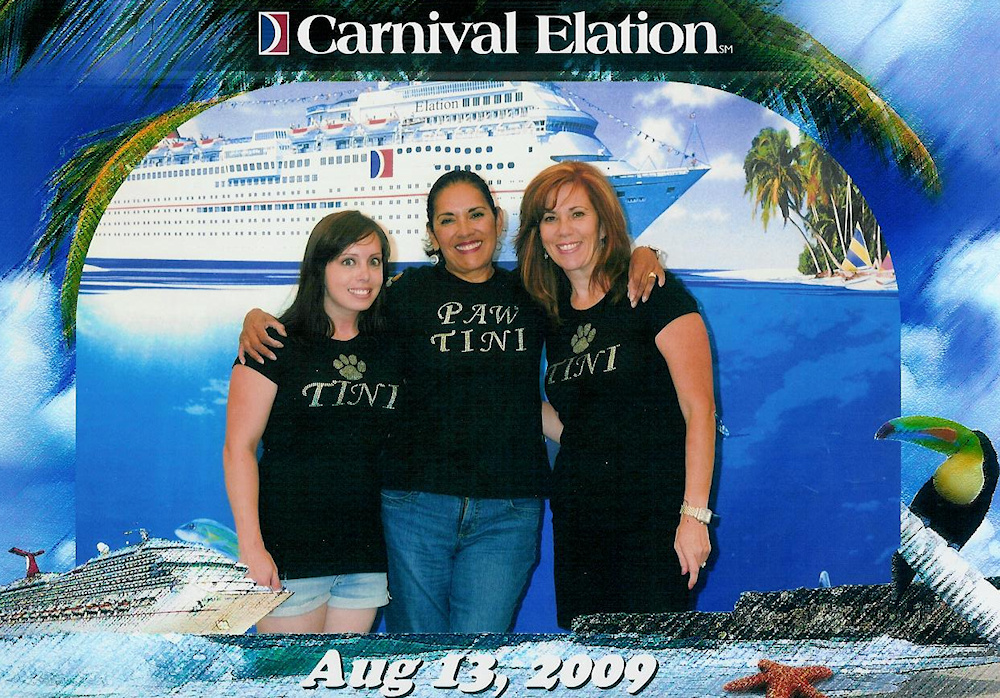 Here are the same three, all dressed up for formal night... 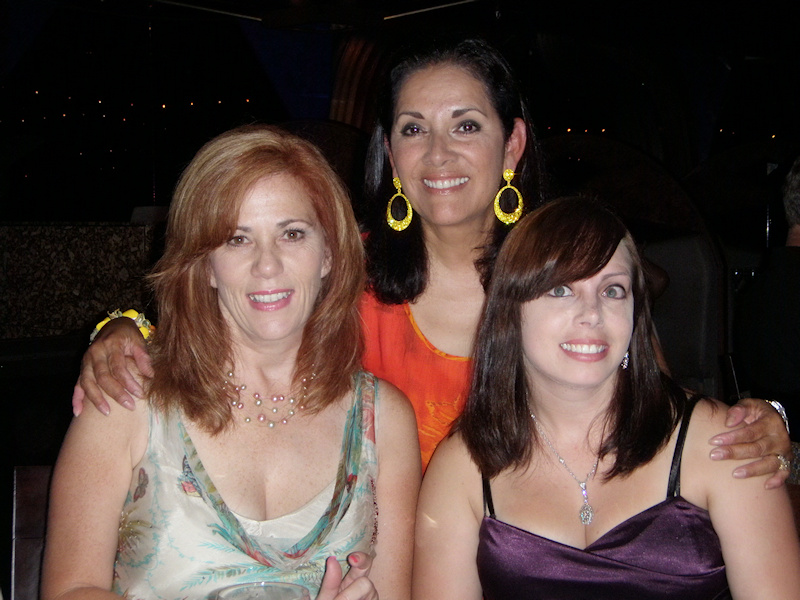 On a different night, all nine of us posed for a photo taken by one of the ship's photographers...

That's about it as far as photos from Cruise-A-Palooza.  But before I go, there is one last photo I'm going to throw in.  Before the cruise, we stopped in to see our good friend, Jennifer Grove.  Here she is in the kitchen with her daughter, Rachel.  If I recall correctly, they were making breakfast for us! 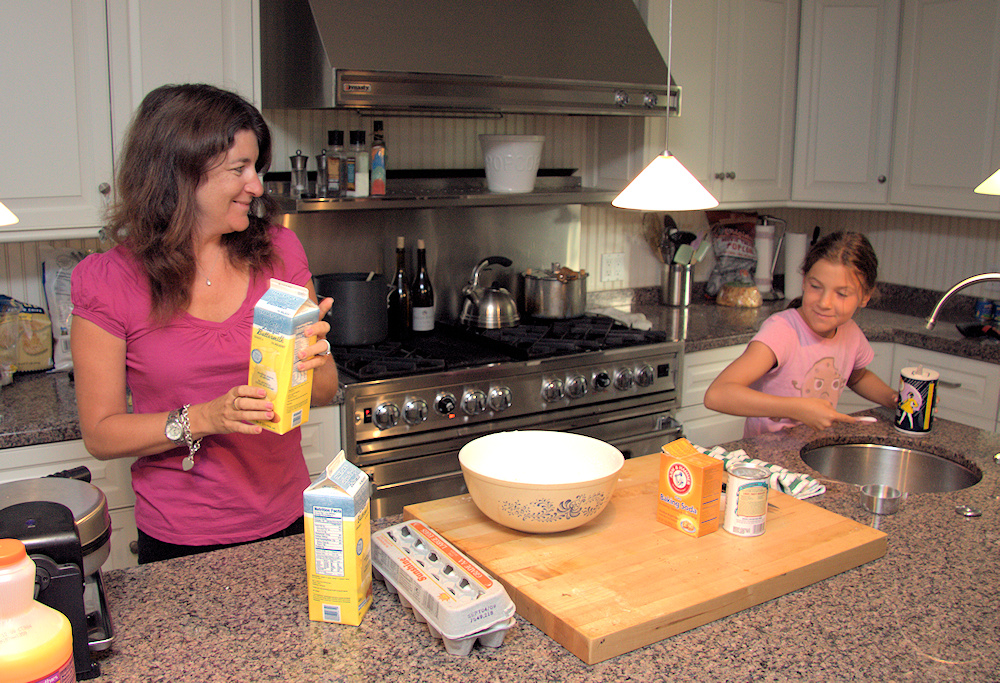 Our first group cruise was a lot of fun, and really opened my eyes to how much fun it is to cruise with a bunch of friends compared to just cruising as a couple.  We retired from breeding Cocker Spaniels in 2010 and our last Cocker passed away in 2018...  so I don't cruise with my Cocker Spaniel loving friends anymore.  But we still do group cruises, mostly with people that have come to know me through my YouTube videos.   If you're interested in joining us for a cruise sometime, take a look here to find out about our upcoming group cruises. 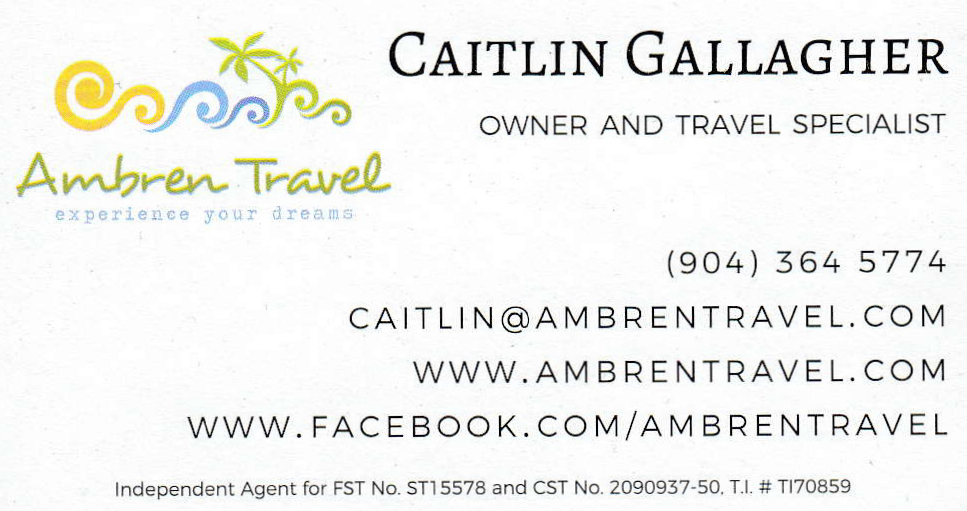